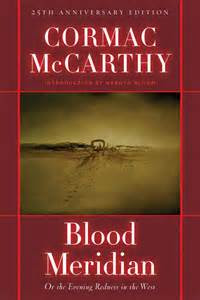 I already posted about punctuation issues in this book in another post, so I'll only touch on them quickly. In that post I talked about the fact that Cormac McCarthy writes in a very specific way, which can be hard to get past enough to read the book. He didn't use quote marks at all for dialogue, commas were rare, apostrophes were rare, he wrote stream of conscious, there were major run-on sentences (some around a page long), and uses of the commas and apostrophes were inconsistent, so I could never find rhyme nor reason for why he chose to use the ones he did.

However, once I posted my little rant about this, I was able to let it go enough to get through the rest of the book.

One of the things I saw repeatedly complained about in other reviews of this book (I looked at the reviews before I realized this book was on my list) was the violence. I fear this is telling, but I didn't find the violence overwhelming. Possibly it was because I read those five billion reviews complaining about it before I hit much of it. But, really, it's a western. I grew up on spaghetti westerns. The Old West is always depicted as violent.

Another reason it probably didn't bother me so much is because the way he wrote made me feel separate from the action. I felt removed. I never engaged with the characters too much. There was one I felt for, because he seemed to stick to some version of morality compared to the others. He was called "the ex-priest." He had a name, too, but it was only used a couple times, so I've forgotten it. Tobin, maybe. Names really didn't matter, anyway. You see, the characters were "the judge," "the kid," Glanton, "the imbecile," Toadvine, "the ex-priest," "the black," and various and sundry others, including a couple Delawares.

Oh, another grammar choice was the lack of capitalizations on some things. The names above are not capitalized because they aren't capitalized in the book. Mexican wasn't capitalized. So on and so forth.

In addition, there's a lot of un-translated Spanish. I knew enough to get me through, but if you don't have some understanding of Spanish, you'll miss small aspects. I don't think any of it was integral to the story, though.

I skipped what the story was about. Whoops. It follows a group of men who are hunting renegade Apache who are killing travelers. Only these hunters kill travelers, too. And when they can't find the Apache, they just go ahead and wipe out villages of peaceful tribes. They lie, cheat, and steal. They randomly kill people and animals, including driving an entire mule train off the side of a mountain.

A lot of reviewers who loved the book claimed this was the "real story" of the Old West. Well, they weren't there and neither was I, so I couldn't tell you. It seemed to me to be the same story told over and over about the West, and from what I've read, those stories usually aren't so accurate. I couldn't say for sure. I did see several sources that said he did extensive research, including reading a book by a man who claimed to be part of the Glanton Gang (the gang of mercenaries this book is based on.) What I will say is that the white men (and one black man) were doing an awful lot of scalping. One of them kept ears on a string around his neck. There was rape, though not descriptive and explicit (thank goodness). It would appear there was implied pedophilia by the judge, as well. And just as in any other western, the Native American characters had no personalities. Shocker. Even the Delawares, who never actually spoke. They quietly rode along, scouted ahead, killed babies, disappeared to go do Indian things, I suppose.

Then again, I think he purposely made his characters oblique and hard to relate to. The judge was the big bad guy. He didn't appear to have a conscience. Yet he was apparently respected by higher ups. I found him a bit like how Charles Manson is being depicted in Aquarius right now. He gave ridiculous speeches, orated bullshit, philosophized. Blah blah blah blah shut up.

The main character was the kid, but we didn't know much about him either. We basically traveled alongside him by happenstance. Fancy meeting you here. He was fairly set in his ways, despite only being fourteen. Outside of knowing that number, you'd never know he's an actual kid by his life.

It took me awhile to figure out how we were being held at a distance, because I was distracted by the grammar at the beginning. Then it struck me that we never actually get a character's reaction to anything internally. It's sort of an omniscient POV, but as a bystander, nothing more. There's no horror at their actions. Or even glee, really. These are just the things they do. By rote. And maybe that should be the most horrifying part of it. Toadvine and the ex-priest may have had the most conscience. Toadvine actually reacts to some things, such as the killing of a child. Perhaps he was trying to show the reader that the West wore a man down, took the humanity out of him?

I've already gone on way too long, but there's a lot to say about this book. I likely won't read another book by Cormac McCarthy, but I will say that it grew on me. The part I've so far failed to mention (though I did in the previous post) is that his descriptions/settings were vivid, somehow beautiful, even when they were harsh. He set each scene so you could picture it. The scenery was almost more of a character than the actual characters. There were sights, smells, sounds. His pacing was solid, plenty of action. Once I got past the punctuation and killer run-on sentences, I settled into the book. I spent the entire time worried that on the next page would be the violence I was expecting that I could not handle. While it wasn't a quick read, it also didn't take me any longer than most books do.

It bears mentioning that the grammar/punctuation is intentional. It's obviously not that he doesn't know how to write. He was even able to get that old spaghetti western vibe into writing. Men of few words. A callousness they can no longer seem to help. A bright white-hot sun that bleaches out the world around them. Pain, thirst, hunger, misery, filth. No, everything he does in this book, whether for better or for worse, is intentional. It's meant to illicit some response. I could see this being a book writing students were told to analyze to find the layers, the purposes, the tricks used to accomplish what he's written here.

So, yeah. This is another one I'm conflicted on. And now I sit here trying to figure out where to put it in my rankings. It's one I've thought about for days since finishing. It needs to be digested. Each day I might feel a different way. I suspect the ranking might surprise you, considering how much time I spent criticizing elements of it, but hey, I like westerns, and I'm fascinated by what he did and the choices he made with his style. I will likely discuss this one with others for awhile to come.

Surprised? Have you read Cormac McCarthy? This book specifically? What's your favorite McCarthy? Do you feel each way he broke the rules was deliberate?