Hello, and welcome to another blogfest for the week!  I just can't help myself; I love Halloween!

This one is presented by Scifi Media. 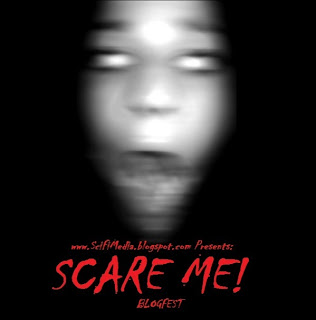 Evening has fallen.  The sky is dark, lit by stars.

My mother and a six-year old me walk out of the theater my mom manages.  Her shift is done; time to head home and grab some dinner, go to bed.

As we're driving, leaving the capital city to head out to my grandmother's farm about twenty minutes away, headlights sweep over us, falling in behind our brown Dodge station wagon.  Just another person heading home, tired, hungry, ready to retire for the evening.

The car follows us out of the city, into the boonies, endless landscape in the darkness.  No one else around.

The headlights grow larger and larger in the rear view until they disappear from view, seconds before our car is bumped.  The other car, also a station wagon, though a different brand, does not stop, but pulls up beside us, tries to hit us again.

My mother recognizes the driver.  She knew him as a teenager; he's the younger brother of her childhood friend.  A boy they picked on, in that big sister kind of way.  Now a man, and one who has something that has short circuited in his brain.  A man with murder on his mind.

His eyes are crazed, expression angry, desperate, hungry.  A bushy beard covers his chin and cheeks, a thin mustache on his top lip.  His hair is closely cropped, light.

My mother steps on the gas, afraid, running not just for her life, but for mine.

She pulls ahead, manages to leave him behind as he briefly loses control.  She knows these roads; he doesn't.

The chase lasts for what feels like an hour, but is realistically probably just minutes.  We round a curve, another, and we are out of sight of his headlights.  My mother shoots up a long gravel drive, leading to a farmhouse in the tree-covered distance.  She drives between some trees, shuts off our lights.

Headlights pass in a frenzy, gravel spraying from the road.  The car keeps going.

But another woman is not so safe.  That night, a young woman dies, brutalized, strangled.  Another young woman escapes with her life after being struck by a station wagon.  The frightening man within it asks her to come out, check out the damage.  She refuses, says they can drive to a nearby gas station and check in a public place.  He flees, finds that other young woman who is not so lucky.

He's caught, ultimately goes to prison to serve two life sentences, convicted in two murders.  He admits to another in 2007.  One long unsolved.

How was he caught?  After killing his last victim and dumping her body in a nearby river, he slid off the road into a ditch and had to be pulled out by a tow truck driver.  Multiple reports talk about a man in a station wagon menacing them, hanging around places women disappeared or were threatened.  The ditch he slid into?  Near the area where the last victim's car was found.  He took the sentences willingly, waived his right to a jury trial.

But it could have been.

**This is a true story, but I have avoided names, locations and exact dates.  This man will come up for parole for the first time in 2024.  I have no interest in being found because I let slip a connection online.

Now that I've shared my scary story with you, here are some links!  (There's just really no good transitions here...how about...Speaking of pure terror, here are some scarily good links!  No?  Well, I tried.)

Operation Agent Ink, run by Ink in the Book, is a workshop from November to February.  It's intended to get you ready for submitting to an agent and help you know what agents want what.

Want to meet other nosy writers and share a little about your WIP?  Debbie at Writing While the Rice Boils has a fun, simple set of questions to help you share with others.  Closes November 2.

Tara Tyler and her friend Vikki are hosting the I'm Thankful for my Readers Blog Hop in November.  Say thanks to your readers and be entered to win prizes!

Becky at Lazy Low-Cal Lifestyle is giving away wheat germ.  All you have to do is write a quick poem about wheat germ.

White Cat Publications is starting  a new mystery themed magazine, to premiere in June.  They will also be open for submissions for their other publications soon.

Mitzi Szereto is seeking short story submissions for an anthology entitled The Darker Edge of Desire.

Did you know there is a branch of NaNoWriMo for younger writers?  There is!  Want your kids or students to get to experience a little bit of NaNo?  Check out how it works.


Have a Happy Halloween and STAY SAFE, everyone!  My thoughts out to those on the east coast, who have a long road to recovery ahead of them.

Are you trick-or-treating?  Going to a party?  Have a scary story to share?  Or maybe just want to share your favorite scary book or movie?