Hello!  This weekend's Author Fest in Manitou Springs was great!  Not only did I survive moderating, being on a Young Adult panel and presenting my stand alone presentation on Making Personal Connections Through Blogging, but I had a great time doing so.  The crowds were small enough that it felt more comfortable, more intimate.  My poor husband got his ears babbled off because I was on such an adrenaline high when I got home Friday evening (the day of my presentation/panel).

It all started Thursday night with a VIP reception, which I was invited to, as I was faculty.  It was held in a stunning old bed and breakfast in Manitou (the Avenue Hotel Bed & Breakfast...highly recommend if you're ever in town).  I chatted with a super nice lady who turned out to be the Manitou mayor's wife.  She was delightful and worked the entire weekend.  Very engaging person.  Those of you on my Facebook possibly already know my big squee moment of the night, which was that Stephen Coonts sat down next to me and we chatted.  He's a really nice guy, but also possesses a sense of humor.  As he lives here in Colorado Springs, we ended up discussing the Waldo Canyon fire a bit (you can't talk to anyone for long without it coming up right now, not locally). 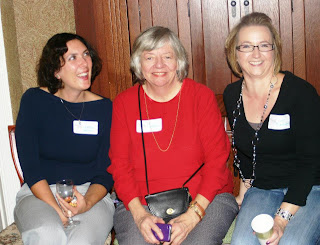 At the VIP reception; I'm on the left.

Friday morning we had a lovely breakfast and listened to Barbara Wright, our morning keynote speaker.  She was a quiet, but pleasant woman who talked about bouncing around in the beginning of her writing career.  She lived in South America and New York City, to name two places, and was an editor (I believe) at Esquire for a time until she realized she was spending all her time doing that and fact checking, and no time doing her own writing.  I had spoken to her and her husband at the VIP reception, as well, and liked them.  One thing about this small conference was that three of the keynotes brought their spouses with them, and it was lovely to get to meet and chat with them, as well.  I think you see a whole new side of a person when you see them with their loved ones.

Our lunch speaker was Barbara Samuel/O'Neal (she's written under both those last names).  She was eloquent and stirred our emotions as she spoke about the things that moved and inspired us.  From comments around me, her speeches are always equally rousing.  This was doubly impressive, considering she was a last minute replacement for a keynote who had a family emergency.

My YA panel was after lunch.  My partners on the panel were Ron Cree and Robert Spiller, both mystery authors.  My goal going into it was just to be sure I did actually say anything helpful during the panel, as these two frequently work together and are good friends, and neither of them are shy or uncomfortable about speaking in front of people.  To my credit, I did, in fact, get a few things in.  Haha!  But it was a good panel, with a great response from those listening, and attendance was encouraging. 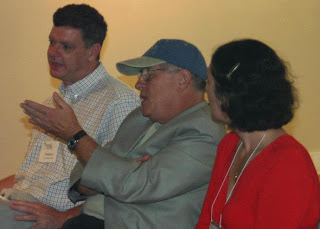 Ron Cree, Bob Spiller and myself at the YA Panel.

Directly after the panel I had my presentation.  My fantastic moderator, heretofore known as Super Moderator, had checked in with me at breakfast to see what I'd need, and when I ran into him at lunch and voiced my fear that the cable in the room I'd be speaking in later wouldn't fit my laptop, he went to our tech guy and spoke to him to make sure he'd be there to help.  Hook up went seamlessly, and the cable did actually fit my laptop, though it couldn't screw in.  Just a little suggestion: Clear your desktop if you're going to give a presentation that involves your laptop being hooked up to a projector...  Luckily, there wasn't anyone other than the tech guy in the room at the time, but it was pretty funny to see all my documents, my games and folders splashed all over the screen.  In fact, I had a little sticky with a password on it up there.  It wasn't an important one, and I don't usually put notes on my computer with passwords, but it was intended to just be on there for the evening and I had forgotten to delete it.

Anyway, my presentation was well received.  The audience took notes and asked good questions, and I had a great turn out.  Not only that, but when I'd practiced Thursday night I was running about 15 minutes long.  I finished in time to take a few questions, so yay!  I did forget to ask one question I'd intended to ask and to give out my business card at the end, but those were two small errors, considering I didn't freeze up after I was introduced.

Funny story: I was doing a run through Thursday after the kids came home from school.  They'd finished their snack and homework, and I'd sent them to watch a movie in another room (something they're typically not allowed to do on school days, so they went quite happily).  My son came walking in while I was sitting in my chair talking to an empty room.  I looked up and he was looking at me like I was on drugs.  He finally asked, "What are you doing?"  That look on his face was well worth it.  You think he'd be used to my lunacy by now, but apparently not.

Friday night I attended an open mic reading.  I didn't take a piece (couldn't remember where my notebook with poetry in it was, and didn't have time to hunt it down), but I enjoyed listening to everyone else.  There were poems read, essays, and snippets of novels.  Each person had to give a fact and a fiction, and we guessed which was fact.  We won chocolate if we got it right.  Each person also had to answer a literary trivia question.  This is the first open mic of anything I've attended, and I had tons of fun! 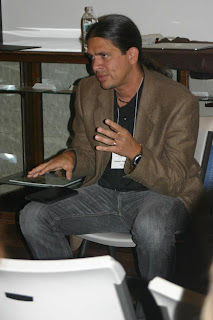 Saturday, our morning keynote was Stephen Graham Jones.  He writes a variety of stuff, but I think mostly horror, in terms of what he's published.  His speech was great.  He first told us what not to do to get published.  He was a natural story teller and told us several interesting stories.  He also read us a piece he'd written, which I wish was published, but isn't.  We were all so fascinated with his speech that Natalie, the main person who puts these on (owner of Black Cat Books in Manitou Springs), told him to go ahead and run late.  Not one person complained.

Our lunch keynote was Stephen Coonts.  He told us how his fame was due to luck.  You see, the month his book was due to come out, a magazine (Forbes, maybe?) had done a spread on Ronald Reagan in the White House.  Coonts (and Clancy) had been published by a Navy-based company, and someone within that company had sent his book to Reagan with a note that he thought he'd enjoy it.  Well, he had just received it when the interview began, and when they took his photo at his desk, the book and a jar of jelly beans were all that sat on his desk.  The marketing folks loved that when one of them happened to discover it while thumbing through the magazine, and they promptly ran with the free publicity. 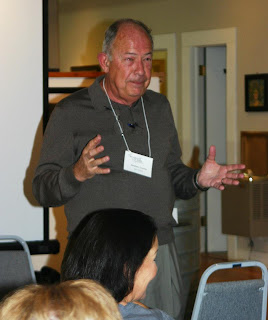 I was so exhausted that I skipped the last presentation and went book shopping instead.  I spent way more than I'd intended, and left with a big bag of signed books.  I was able to get my dad Flight of the Intruder, signed, so that was cool.  Hopefully he likes it.

So that was my experience at Author Fest.  It was my first time there, but I hope to go each year after this.  It's definitely different than a larger conference, like Pikes Peak Writers, but different isn't bad.

Having just bored you to tears with my rendition of "why I had a great weekend," I'll close with a reminder that I'm doing NaNoEdMo this month in order to do NaNoWriMo next month, guilt-free.  My hope is to get Lonely Hollow: Synthesis fully edited so I can start querying.  Whether that will happen or not is up in the air, but I plan to make a good attempt.  At some point this week I may get myself a ticker/status bar for the number of pages I edit, but we'll see what I find.  That will be in the sidebar if I locate one I like.

You're welcome to join me for NaNoEdMo.  It doesn't have to be a novel; it can be anything you need to edit.  If I get time or decide to take a break from novel editing, I intend to edit a couple short stories that need it.  My hope at the end of the month is to have material to submit, one way or the other.

I won't be doing a linky for NaNoEdMo or anything, but post in the comments or let me know if you plan on giving it a try, too.  Join me!  I feel like I'll be able to relax in November as long as I've gotten some editing completed.  That way, I get to just enjoy writing, which is always such a pleasure.

Planning on jumping into NaNoEdMo?  How about NaNoWriMo?  Ever been to a small conference?  Seen any of these keynotes?  Have you given a presentation at a conference?

**All photos of the Author Fest were taken by Margaret Morris.