A Little Ice, a Lot of Awareness & Links

When I originally posted this, I couldn't put my dad's Ice Bucket Challenge video here, but he put it on YouTube, so here it is!

If you're not aware, my dad was diagnosed with ALS (Amyotrophic Lateral Sclerosis, better known as Lou Gherig's Disease) a little less than two years ago. A lot of people have never heard of it, though I can kind of let them know what it is by saying, "You know, it's what Stephen Hawking has." But Stephen Hawking is a rare case. Most people only live two years after diagnosis. My dad will be one of those who makes it beyond two years.

When I first heard about the Ice Bucket Challenge, I was miffed. As far as I knew, people were dumping ice over their heads instead of donating. It seemed to me to be a frivolous thing, not something that would do any good. Then the posts started popping up about "slacktivism," as in folks spreading the word about things via social media without doing anything real to fix those issues. Things like changing your photo on Facebook for a cause, private messages about "where you like it," etc. Whether those things bring necessary attention to the issues they're trying to expose is a question I can't answer. I can't say I've learned anything new from one of them.

I even posted a rant on my Facebook page saying to dump ice water over your head without donating or at least passing along some sort of information about ALS or a link to donate to wasn't worthwhile. I commented on someone else's rant that I was coming around to it, as long as folks were actually donating, but that I most certainly wouldn't be dumping ice water over my head.

But when I saw this challenge spreading like wildfire and, even better, millions of dollars worth of donations pouring in, I realized that this was a positive thing. That my self-righteous judgments were better reserved. And that it wasn't my business in the first place to decry what others were doing.

Even moreso, I saw how excited my dad got about it when he came across it. Not only was he excited about it and emailing out videos he found, but he took the challenge himself today at work, as I mentioned above. And he challenged me, one of my cousins, and the CEO of Hewlett Packard, my dad's current (though not for much longer, as it is becoming more and more of a struggle for him to work) place of business.

My dad has said from the beginning that he believes they'll find a cure. That he'll be a long-term survivor. He has been nothing but positive, even as the disease eats away at him. This challenge has given him a little bit of renewed hope, some positive energy over what is an incredibly negative disease. One that destroys every part of your body except for your mind, which it leaves perfectly intact within a frail, destroyed body.

Before I knew anything about this Ice Bucket Challenge, I had signed my family up for the Denver Walk, put on by the ALS Association. I'll have a little video for you guys next week for the Ice Bucket Challenge (hopefully). In the meantime, I'm going to break the rules and challenge you all before I've officially done it. Obviously, I will be donating money, as well, and I'll still be participating in the walk, just as I did last year. Here's part of my team from last year on the cover of the handbook! (We won the costume contest): 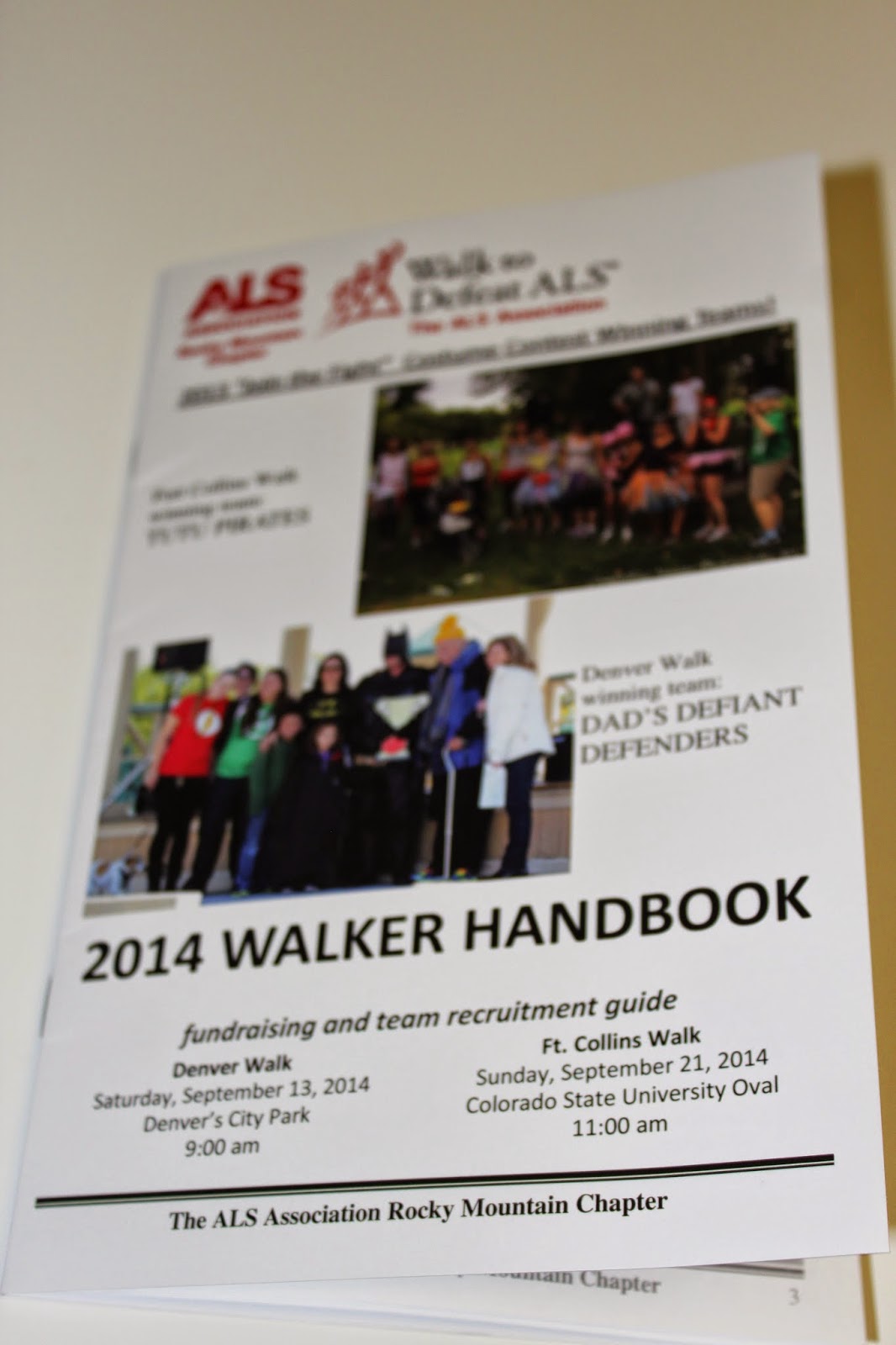 I know, it's not a great pic of a pic, so here's an actual photo of our team: 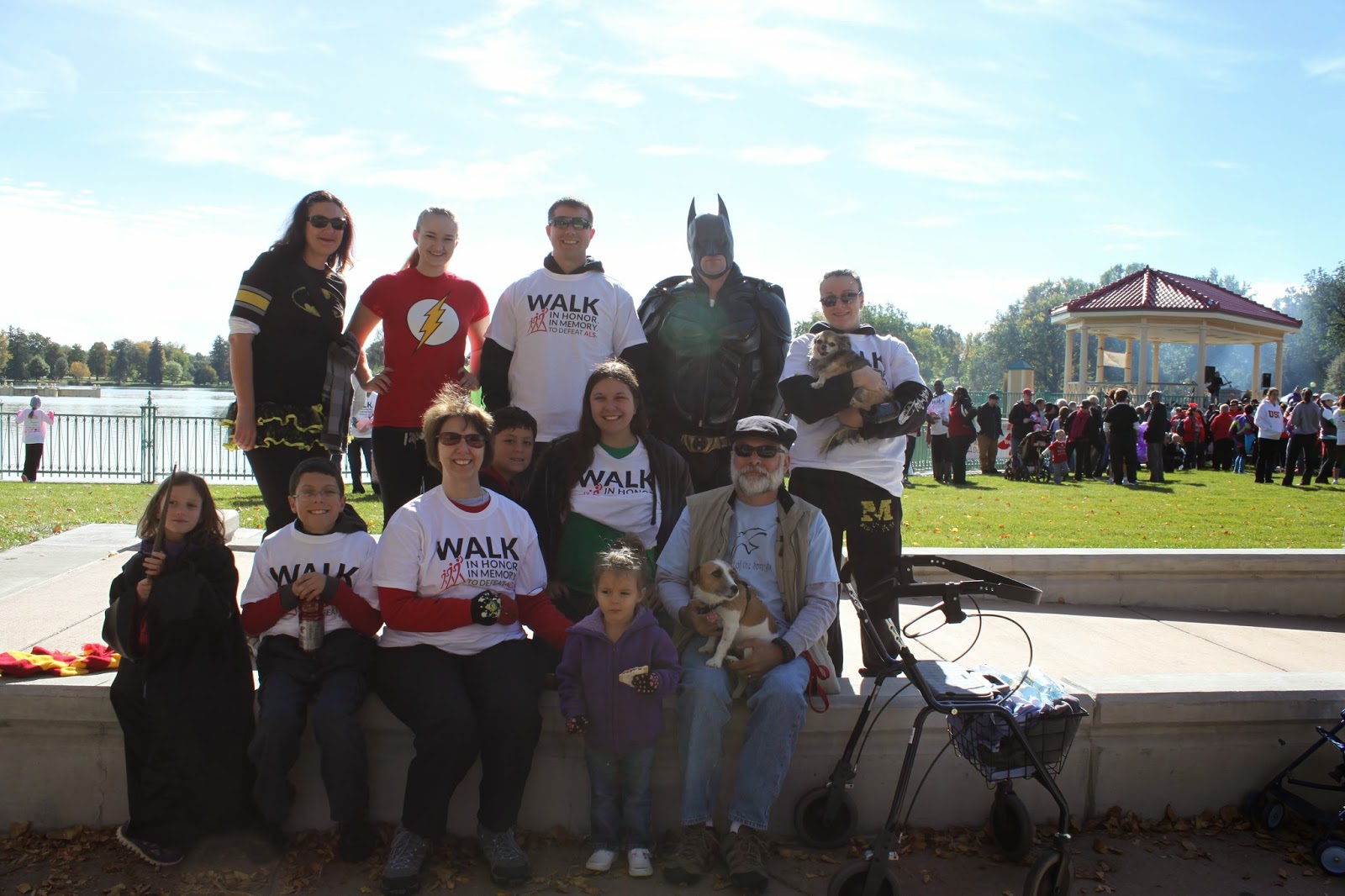 Even if you don't take on the challenge, even if you don't donate, pause before ranting about how useless it is. It's brought at least one person hope, and I doubt he's the only one. Bringing awareness to something like ALS can't be bad. Can it get annoying when it becomes over the top? Yes. But it will also be short lived. So I've decided that instead of insulting it, I'll embrace it. Just for a little while. And I'll enjoy the fact that maybe a few more people are aware of ALS, possibly even of what it actually is, and that just that much more funding went to the ALS Association this year to continue funding research into a cure, support and care of those suffering from ALS, and awareness. And I'll try to remember not to be so critical of the next big thing to sweep across social media.

If anyone is interested in donating to the ALS Association, you can GO HERE to donate. If you're interested in supporting our team, we're Dad's Defiant Defenders, and your money will go to the same place, but we'll get credit toward our team's goal of $1500. For that, you can GO HERE to donate. And if you happen to do the Ice Bucket Challenge, I'd love for you to drop me a note and let me know you did it. I know Livia has already done it!

Now for some links:

Purple Sun Press is accepting fantasy short stories. 1000-7500 words. These will be gathered into a compilation. Deadline September 30. Pays $.01/word.

Kill Your Darlings accepts original writing during the month of September. Pay varies depending upon type of submission: lead feature commentary, commentary, fiction, or reviews.

Pink Narcissus Press is accepting submissions for their anthology (Gender) Queered Space. 2000-10,000 words. They are interested in underrepresented characters in sci-fi, fantasy, and horror. $50 token payment.

Local Hero Press is putting together an anthology under FakeEditor (you can look it up on Twitter.) It is entitled Who is Ebony Boneshaft? 3000-5000 words. Open for submissions between September 1 and 30th. Will pay in royalties.

The Puritan is accepting submissions. They take interviews, essays, reviews, fiction, and poems. Pay varies by type of submission, between $15 and $50. Deadline September 25.

The Coalition of Texans With Disabilities is holding the Pen 2 Paper Contest. Deadline is September 22. Four categories: fiction & drama, non-fiction, poetry, comics/graphic narrative. All entries must have a main character with a disability or a theme dealing with disability.

Alex J. Cavanaugh has announced his next blogfest, the Underrated Treasures Blogfest. It will take place September 22. Post about an obscure treasure, like a band you love that no one else seems to know about. Or a movie.

Barnes & Noble has a Discover Great New Writers Contest. They recognize one in fiction, one in non-fiction. Prize is $10,000 and promotion by B&N. This is for titles yet to be published, but no less than three months from coming out. Deadline September 25.

Any of these of interest to you? Anything to share? Have you done the ice bucket challenge? Know anyone who has? What causes are near and dear to your heart?