Today is Mina's Resurrection Blogfest II, wherein we resurrect one of our posts from the last year and share it with all you lovely people a second time. 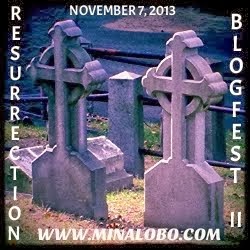 I went back and forth on what to re-post, and finally ended up with something that seemed to fit the badge image. Note: I did edit it to remove a mention of a blog hop I had coming up, but did not edit the body of the post itself at all.

Originally posted on December 17, this is...


Do you ever get so lost in your fantasy world that you freak yourself out?

When I was a teenager, my family loaded up in the Pickle Mobile (our 8-seater Dodge van), all seven of us, and we took a road trip from Colorado Springs to California, then up the Pacific Coast Highway to Oregon.

The Pacific Coast Highway is gorgeous, at least the parts I remember (it's been awhile, other than just a stretch in Oregon).  However, at night it's dark, and much of it is enclosed by trees.  Small, privately owned businesses used to line it (can't speak for now), and their empty black eyes stared at us, reflecting our headlights before absorbing them and going dark once again.


We believed in driving through the night, and the hour was late enough that there was no one else on the road for long stretches.  The isolation closed in on us as the younger kids fell asleep, leaving only my parents and I awake.  The van was massive, and the empty spaces surrounding my sleeping siblings yawned behind me.  A car came up behind us, matching our speed, never altering from the pace we set.

I began to spin a tale of who might be in that car behind us, and what they planned for us when they got us to just the right spot.

At first, my parents laughed.  Gosh, wasn't I funny?  But at some point the laughter stopped, and silence reigned in the front seats of the van.  My dad's foot pressed down on the gas in an unconscious gesture of unease.  My mom's hand clutched the door handle.

And in the back, all alone in that yawning darkness, I began to believe my own tall tale.  A sensation of electric unease worked its way up my spine, and I wanted desperately to undo my seatbelt and crawl up into the space between my parents.

It should be noted that the vehicle behind us kept up with the speed, even when my dad accelerated.

There were no open gas stations, no 24 hour restaurants.  Even private residences were darkened, closed up.  There was no one that would know if something unimaginable were to occur on that mostly deserted stretch of highway.

Then the car turned off, and we all chuckled uneasily.  Phew, escaped that homicidal maniac.

The thing is, we all knew there was no psycho behind us.  But the setting was right, and I was so intent on my story that our reptile brains kicked in and took us into fight or flight mode.

I do this all the time.  Especially when I'm writing horror, or when the lights are out and there's a sound in my bedroom I don't recognize.  When my husband is out of town, and I'm all alone in bed, I run through every possible scenario as I try to drift off to sleep.  I run through what I'll do if the alarm goes off.  I terrify myself thinking that someone may have entered the house when I was out with the kids, and they're just waiting for my breathing to relax before they creep out of my closet.  I fear that someone can take my babies out of their rooms without my hearing it.

Hubby just got back from a business trip to Australia, and the week was a rough one.  There was not one night I got a full night's sleep, due to various crazy things happening.  Two nights ago, the power went out for an hour and a half, starting at half past midnight.  Go check a moon calendar to see how much moon there was out there...I think a sliver that night!  As I crept through the house to get to the one place I knew we had a working flashlight, I first looked out the front door to be sure it wasn't just my house that had lost power.  After all, I read and watch horror/thrillers all the time.  I know what happens when they're coming for you.  THEY SHUT OFF YOUR POWER!

After I saw that our entire neighborhood was pitch black, I needed reassurance that someone HAD power.  After all, I live near NORAD, and an EMP isn't out of the question, right?  Would that violate the stone walls of Cheyenne Mountain?  I don't know.

Happily, up on one of the burned hills stood a lit up Christmas tree.  Someone had power!

Okay, not terrorists then.  Not unless they had it out for my little suburban neighborhood.

My flashlight only reached so far; it was just a tiny one.  I shivered my way through the house, hunting down candles and a lighter.  The darkness seemed to be alive, constantly moving and changing in my peripheral vision.  We have a big open area with vaulted ceilings, and the open space around me was somehow creepier than when I was in the regular layout of the living room.  I couldn't see or feel what was above me or around me.  I began to imagine more than just shadows coming up on me.  The hair on my neck stood up.  A shiver worked its way up my spine.  My heart pounded.  My throat filled with the sands of the Sahara.

Did I mention I was watching American Horror Story when the power went out?  I don't find the show at all scary while watching it, but apparently a power outage was just the thing to add a slight edge to its frightfulness.  A man in a freaky leather sex suit would blend in perfectly in the shadows.  And what about creepy mutant babies?  What about all the things NOT in American Horror Story?  Things with tentacles, gaping maws, razor sharp teeth, talons.  What about that dude waiting in my closet?  The monster under the bed?

Once I had candles lit, things were much improved.  A warm glow surrounded me, and I could see the entire room, though the hallway was all the blacker for the light around me.  As long as I kept it in view and had my back to the wall, I was fine.

Except for the silence.  When they say silence is deafening, they're right.  I kept feeling the need to pop my ears, because the silence was a pressure against them.  All the things that make electronic noise and mask the creaks are gone.  No snoring refrigerator.  No buzzing television set.  No humming machinery.  Silence.  Deep and awful.  And out of that silence arose sound after sound, creak after creak.  It was windy out, and somewhere the air whistled and whispered in vague and terrifying ways.  Branches scratched along the side of the house.  The back porch shifted, and it was so black outside that, even sitting in a darkened room, I could not make out whether there was something out there.

One of the endless nights before that, as I lay in bed with the lights out, I made the mistake of dangling a foot off the bed.  I was perfectly fine until a single thought crossed my mind.  You know that thought you get when your foot is exposed from beneath the covers.  I could almost feel something reaching for me, scuttling about under my bed, saliva trailing down its chin as it prepared to yank me under into its hellish lair.

Of course, I yanked my foot back under the covers, but the darkness had won.  It had filtered into my brain, taking root while I was otherwise occupied.  A scuffing sound became a grotesque creature crawling toward me along the carpeting.  That clicking was someone, or something, at my window.  What was that in the corner?  Was that pressure on the bed?  Was something in here with me?

I'd been working on a zombie tale involving children during the day, and my daughter, all of five itty bitty years old, burst into my room around 3 in the morning.  At first, she didn't say anything, just exploded through the door and shuffled over to the side of the bed, her hair in disarray, her outline the only thing visible to me.  Thank goodness she didn't groan at me.

Just as in the van all those years ago, I knew none of this was real, that not a single one of these fears would come to life.  I knew my daughter was no zombie, that there was nothing under my bed.  There was no one in my closet (hell, I'd checked).  That didn't stop the thoughts from occurring to me, flitting through my head until I latched onto them.

The funny thing is that when my hubby is here, I don't wake him up if I hear a noise; I investigate it myself.  I've always been that way, even as a teenager.  I guess there's something comforting in knowing there's someone around to hear you scream?  Someone that can do something about it?  That's all I can think of for the sudden fear that grips me when he's gone.

Not to say I don't freak myself out plenty when he's here.  I do.  Sometimes it's just a bit amplified when there's no other adult in the house.

So, yeah, I've got an active imagination, but I know I'm not the only one.

Do you have an overactive imagination?  Do you freak yourself out sometimes?  Any notable examples you'd like to share?