So it is official: I will be leading a workshop on social media for writers in October for the Pikes Peak Branch of the National League of American Pen Women.  Gasp!  I sent in the title and description today, which will soon show up on the website, which means I cannot flee, nor can I duck out gracefully.  ACK! 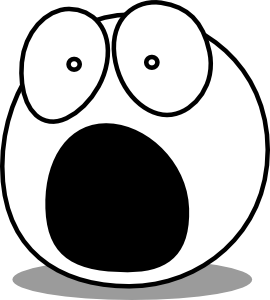 I'm a pro at attending workshops, but this will be the first I've led.  I haven't had to give any sort of speech since Speech class in college (which, by the way, was right before I got pregnant with my daughter, so we're not talking decades or anything, but six years is long enough!  It's more than halfway to a decade...)

I'm hoping I still have my handy dandy Speech textbook downstairs.  I'm pretty sure I do, as I only sold one textbook back, one which I've regretted not keeping ever since.  I can assure you that $20, or whatever pittance I received, was definitely not worth selling it back for when I could have continued using it.

While I'm utterly terrified, at this point, I'm also quite excited.  I'm already creating the workshop in my head, and I'll enjoy putting together a slideshow and handouts, but it's the talking part that will be hard.  I can assure you that my face will be bright red the entire time, because that's how I roll.  Haha!  Okay, hopefully not.  I'm actually pretty comfortable with the topic, which should help a lot.  I won't have to script anything, and can just use my notes as a guideline so I don't get off topic.  I work better off-script.

The workshop will touch on Facebook, Twitter and blogging, though I'll mention other forms of social media (LinkedIn, Pinterest, Good Reads) so people are aware of what's out there.  It's been requested as a very basic introduction, including setup of the accounts, as well as protecting oneself while putting yourself out there publicly.

Really, I talk about this sort of thing on here, so I'll just be doing it out loud, without need for spell check.  Right?  RIGHT!?

Oh, hey, and speaking of workshops, I'll be attending one presented by Brandon and Bryan of A Beer for the Shower next week via Pikes Peak Writers!  Go figure, small world, and all that jazz.  It's on blogging, which I already do, sure, but I'm betting they'll have plenty interesting and enlightening to say about it.

Any tips from you pro's out there?  What other forms of social media do you think deserve a mention?  What do you think is the A#1 most important thing newbies should know about social media?