Today is the cover reveal for Nick Wilford's Corruption, book two of the Black & White trilogy. Note that the first book in the series is free; more information can be found below! 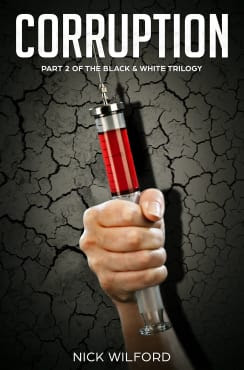 Wellesbury Noon and Ezmerelda Dontible have found themselves in a position where they can make their native land somewhere that lives up to its name: Harmonia. However, they’re setting their sights further afield for their number one task: eradicating the disease that has plagued the neighbouring country of Loretania for generations and allowed the privileged Harmonians to live in a sterile environment.

After dispatching a team of scientists to Loretania, armed with cratefuls of an antidote and vaccine and headed up by their friend, Dr George Tindleson, Welles, Ez, and Welles’s brother Mal – who grew up in that benighted nation – start to worry when they hear nothing back, despite what they had agreed. Commandeering a fishing boat to follow the science team over the sea, they soon find that, while the disease may be on the way out, a new kind of infection has set in – the corruption they thought they had stamped out in Harmonia.

Can they get to the root of the problem and eradicate it before even more damage is done to an innocent people?

*** Warning – this book contains themes that some sensitive readers may find upsetting. *** 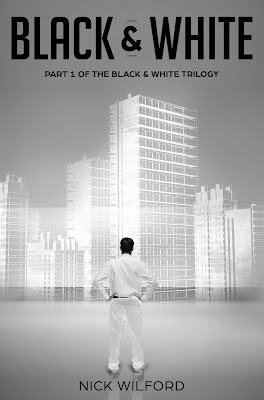 What is the price paid for the creation of a perfect society?

In Whitopolis, a gleamingly white city of the future where illness has been eradicated, shock waves run through the populace when a bedraggled, dirt-stricken boy materialises in the main street. Led by government propaganda, most citizens shun him as a demon, except for Wellesbury Noon – a high school student the same age as the boy.

Upon befriending the boy, Wellesbury feels a connection that he can’t explain – as well as discovering that his new friend comes from a land that is stricken by disease and only has two weeks to live. Why do he and a girl named Ezmerelda Dontible appear to be the only ones who want to help?

As they dig deeper, everything they know is turned on its head – and a race to save one boy becomes a struggle to redeem humanity.

Congratulations on your upcoming release, Nick!