Guest Post - Swirl: How Being Mixed Race Informs My Writing

Jessica McDonald is a Colorado author (though she currently resides in Japan). Her first novel, Born to Be Magic, the first in the Council Witch series, is coming out soon, so she's stopping by for a visit. In addition to being a friend, she's also a fellow mixed race/part-Cherokee author, and she addresses how that informed her book.

Here's her Kickstarter Link if you want to check it out: Born to Be Magic

Swirl: How Being Mixed Race Informs My Writing
By Jessica McDonald

When I was young, I didn’t understand the concept of being mixed race. Part of my family was white, part of my family was Cherokee—it was as simple as that. I didn’t particularly grasp why I was lighter skinned than my relatives, or what it meant when I was told to say I was white. But when I was eight years old, my school held a re-enactment of the 1889 Oklahoma Land Rush. The white kids played settlers. The Native kids played dead on the ground. I didn’t know where I belonged. I asked my teacher where I should go, and she asked me, “Who do you want to be?”

Loaded question for a second grader.

Fast forward some decades and that question, “Who do you want to be?” has defined my life. Because I’m white passing, I didn’t identify myself as Native for a long time. I felt like I wasn’t “Indian enough.” But my mom took me to ceremonies and sweats and taught me our history, and I didn’t feel right in the white world either. Navigating the choppy waters of racial identity proved harder than I thought. If I said I was white, I felt like I was denying an entire side of my family. If I said I was Native, I felt I had to prove it—like there was some invisible checklist to certify my Nativeness. My mother died when I was 16, and my grandparents had passed on before her; with their loss I suffered a cultural loss as well. I no longer had anyone to guide me in my search for identity. I had only stories, and a sense of belonging to two worlds and also being a fraud in both of them.

This search for identity is a central theme in my writing, and I don’t think you have to be mixed race for it to resonate with you. We’re all searching for acceptance, we’re all searching for our truth, we’re all ships sailing through a storm. In my debut novel, BORN TO BE MAGIC, the protagonist, Rachel Collins, walks this line between human and witch. She craves normality while defining herself supernaturally. It’s these contradictions, these conflicts, that inform the process of developing our identities.

Rachel is a ley witch, a rarity among her kind, and is somewhat shunned for being too dangerous. Simultaneously, she cannot set aside that which makes her different in order to be completely human. In much the same way, I could not set aside my Nativeness to be completely white, nor could I set aside my whiteness to be completely Native. I had to blend the two, to create a world of my own design, where I could stand on solid ground instead of having one foot on the platform and one foot on the train. Rachel’s story is about finding that world, about carving out a definition of self that is uniquely hers.

My experiences are neither completely Native nor completely white. I walk through the world with white skin, but I bear the weight of the tragedies that befell generations before me. I move through a modern world with ancestral knowledge. I know that I may be rejected by either of my two halves, and therein lies the most important point: The search for identity cannot begin outside the self. To reconcile those conflicts, we must turn inward. One of my favorite indigenous artists, Frank Waln, puts it best in his song “Good Way”:

“You’ve been waiting your whole life to find out who you are
These people judge your skin but still they fail to see your scars
Everything you’re looking for out there is deep inside
Your heart is like an ocean when it’s open deep and wide.”

In my novel, Rachel has to learn this lesson the hard way. She constantly rejects authority while craving its acceptance. She shuns a “normal life” but refuses to fully embrace her witch status. She wants to live in the middle of the Venn diagram of supernatural and human, and doesn’t know how to create that space for herself. It’s her journey of self-identity that serves as her central internal conflict.

Themes of identity and belonging also feature in my other works. My nonfiction essays have largely centered on the representation of indigenous peoples and the conflicts faced by mixed-race persons. While everyone goes through a self-discovery process, my experiences provide me with unique perspective. For Rachel, she encounters people who help her decide her identity for herself. For me, it was reconnecting with the indigenous communities and adoptive families that allowed me to meld my two worlds. I still have fear of being a fraud; I still have fear that I’m missing my Indian card; I still feel somewhat out of place in white spaces. But I’ve taken that inward plunge, and I’ve found a way to bring my two halves together. This allows me to take characters on the same journey, one that I hope will offer comfort and insight to those that journey with them. 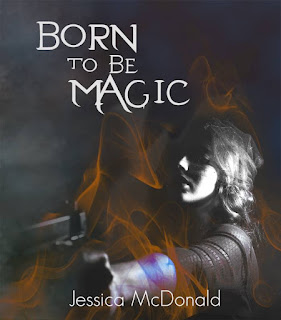 Rachel Collins isn’t sure sarcasm is an actual method of self-defense, but she keeps testing the theory. On paper, she’s an agent for the Colorado Bureau of Investigation, but in reality, she’s a ley witch, and as a deputy working for the High Council of Witches, it’s her job to keep the supernatural in line and protect humanity from the things they don’t know exist. It’s dangerous, and not just because a Walking Dead reject might eat her face. If she uses too much power, she could become a monster herself.

It's all magical forensics and arresting perps for dealing with demons until Rachel’s brother disappears, kidnapped by someone sending her a very particular message. Defying the Council’s order to stay off her brother’s case, Rachel hides her witchy identity from the demon hunter Sean—which definitely has nothing to do with how hot he is—and strikes a deal to save her brother. Unfortunately, their plan risks corrupting Rachel's soul, a grievous offense in the eyes of the Council. Now she’ll have to prove she’s not hellbound—or suffer the same brand of justice she used to serve.

About Jessica McDonald: Writer, speaker, geek. Jessica writes urban fantasy and YA, and is a purveyor of real-life magic. Powered by caffeine, ridiculousness, and charm. Proud indigenous.

Jessica splits her time between Japan, where she is currently an English teacher, and Denver, where she spent many a year as a marketing director. She has owned her own company, designing promotional campaigns for both authors and businesses. She earned her Master’s degree from the University of Denver and holds undergraduate degrees from The Pennsylvania State University, and has worked for everything from political campaigns to game design companies. She has published original research on online user behavior, and presented to national conferences on how social media really is more than just cat videos. Her recent presentations have included using fandoms as an in-road to STEM for girls and diversity in media.

When she’s not writing or working, she spends time exploring Japan; playing with her two cats and dog; playing the cello; gaming; doing outdoorsy stuff; and avoiding adult life as much as possible. A two-time Zebulon Award winner, she is currently working on her sixth novel, a Diné-inspired YA paranormal called SKY MARKED. She belongs to Pikes Peak Writers and Rocky Mountain Fiction Writers, as well as the crucial-to-her-success critique group, Highlands Ranch Fiction Writers.

Thank you, Jessica! Your story hits close to home, especially when you talk about having a foot in each world and feeling like a fraud in both. The quote from Frank Waln is perfect.

Jessica's book will be released soon. Looking forward to it!

What life experiences have shaped your writing? How much do you see yourself reflected in the characters and worlds you create?