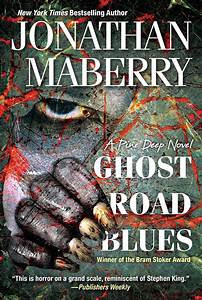 This is the first book in the Pine Deep trilogy. Unfortunately, there's no real resolution of story in the first book, which is frustrating, because it leaves everything hanging. What I like to see in a trilogy or series is a resolution of a significant plot arc at the end of the book, with other plot lines unresolved for the next book(s).

Maberry creates characters you can really like and characters you can really hate. The evilness of the bad guys is significant, with no real redeeming features. This struck me, because I was recently on a panel where a psychologist who had worked in a mental health facility looked out at the audience and said something along the lines of, "I envy those of you who think that bad people are merely evil." They were less scary to me when all these awful people were just pure evil and tied to the main plot. There wasn't a gray area with them.

I liked the character of Crow, our main good guy. And Mike, a kid whose POV we see through. The women are lackluster characters (you can keep telling me Val is a super strong woman, but when she spends most of her time crying, freaking out, and being rescued, you've just disproven that.) Up until she was put under duress, I liked Val. Even after that, I was still rooting for her, but I got frustrated with the character at times. She's smart, she's loyal, she's determined, and she's strong and capable, but when Crow's around, she loses that. She exists to be rescued by men in the story.

Something that bothered me was that the main "monster" is hidden from us in this first book. The supernatural is brought into the story early enough, but the something more being hinted at (we don't know for certain what it is, though a blurb on the next book gave it away--whoops) feels like it's coming in way too late in the storyline. There should have at least been seeds planted earlier.

However, having said all that, Maberry can really paint a scene. I became deeply embroiled in the setting. The pacing is also good, and the setup such that I want to see it all resolved. While this wasn't my favorite book, it drew me in and I didn't hate-read it.

My Top Ten remains the same.