In a follow-up to the Gorge-ous [Mostly] Wordless Wednesday, I thought I'd post a couple of the critters I enjoyed catching a glimpse of at the Royal Gorge Bridge and Park. 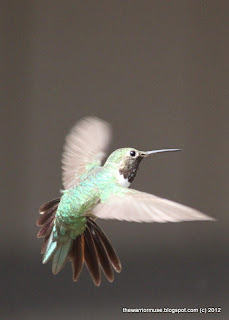 We got to watch these guys while waiting to go down to the bottom of the gorge in the incline car.  There were three different throat colors on the hummingbirds (my ruby ones came out blurry). 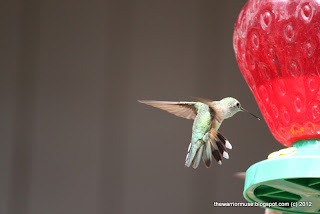 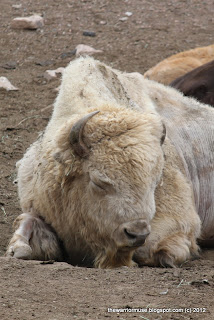 This is a white bison!  Maybe you've heard about their sacred place in the parts of the Native American community, maybe not, but they are considered a symbol of peace.  They had three there!  And none of them were albinos (no pink eyes or nose).  I've seen my very own white bison!

As a little bonus, here's the Legend of the White Buffalo:

"One summer a long time ago, the seven sacred council fires of the Lakota Sioux came together and camped. The sun was strong and the people were starving for there was no game.

Two young men went out to hunt. Along the way, the two men met a beautiful young woman dressed in white who floated as she walked. One man had bad desires for the woman and tried to touch her, but was consumed by a cloud and turned into a pile of bones.

The woman spoke to the second young man and said, 'Return to your people and tell them I am coming.' This holy woman brought a wrapped bundle to the people. She unwrapped the bundle giving to the people a sacred pipe and teaching them how to use it to pray. 'With this holy pipe, you will walk like a living prayer,' she said. The holy woman told the Sioux about the value of the buffalo, the women and the children. 'You are from Mother Earth,' she told the women, 'What you are doing is as great as the warriors do.'

Before she left, she told the people she would return. As she walked away, she rolled over four times, turning into a white female buffalo calf. It is said after that day the Lakota honored their pipe, and buffalo were plentiful." John Lame Deer, 1967

Now for some links:

Where Writers Win is trying to build a comprehensive list of Book Review sites and is looking for your help.  They do already have an existing list that can be a great resource.

I didn't have time to really look this over and understand it, but it looks like something that may be interesting if you have time.  Libboo is a web community of authors.  They are looking for people with completed manuscripts, or who are already self published.  They are interested in creating buzz around your book, as well as helping you to connect with people who are interested.  Other than that, you will have to read for more info!

Lastly, this is a great speech for you artistic types out there.  It's a commencement speech Neil Gaiman delivered.  You can thank Madeleine at Scribble and Edit for recommending it to me in the comments section last week!

I will be on vacation next week to visit family, so will see you the Monday after.  Have a great week!

Any links to share?  Ever seen a white bison?  Heard of the story behind it before?  Think it might signify world peace?

what a great story

I love the story and the photo. White bison are now among my favourite animals [with apologies to Charlie the Cat who is sitting on my lap as I type this]

Oh, man, your hummingbird pics are awesome! My camera can't even focus on them. :(

happy vacation! Loved all your pics. The hummingbird and white bison are beautiful.

I haven't seen a white bison, but I saw a regular one at the circus a lot of years ago when my oldest was little. It was so scared, it kept pooping. And that's all I remember about the circus.

Becca, I enjoy it.

Rosalind, poor Charlie! He can share with a white bison.

Andrew, I do love that I can get hummingbird pictures now! I got one with his tongue sticking out, but it wasn't a great picture overall.

Tonja, poor little bison. :( I'm not a big fan of the circus. I've been once in my life, as a kid, and I was so sad about how mistreated the animals were that I've never been able to go back.

We have a family of hummingbirds that live just outside our front window! :)

Great story, but since I'm from South Africa, I've never seen any sort of Bison.

A white bison? I never knew. You learn something every day! Those hummingbirds look beautiful too. How amazing to be able to see this wildlife in its habitat.

I enjoyed this version of the white buffalo legend.

I didn't know there were white bison! I'd never heard about them before. I love this pic and legend. Love the hummingbird pics too, how cute.

DL, Oh, I'm jealous!! We just put out a hummingbird feeder, so we'll see if it brings any, but it may be late in the summer. I know nothing about hummingbirds.

Misha, glad you liked it! I'd love to visit there and see the wildlife.

Nick, oh yes, I love to see animals in their natural habitat. For the bison, I'm sure they'd much prefer roaming the plains.

The hummingbird pic caught my eye.

Hubs has heard of the Legend of the White buffalo. He's got native blood in his background. Thanks for sharing the Legend.

D.G., was the legend he heard the same? I'm curious how many iterations of it there are.