Hello, my spooky friends. It's officially Friday, the 13th! Aside from being a horror movie extravaganza holiday for some of us, it's also the day my new collection, Bruised Souls & Other Torments, is available for sale!

As of the time of this posting, the e-book is live on Amazon, but the paperback isn't yet. It should pop on there any time. I'll have it available on Smashwords, Barnes & Noble, etc. in the coming week. 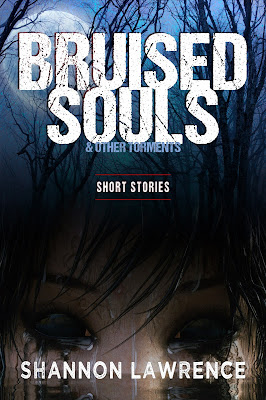 You can buy it on Amazon by clicking this link.

Updating with the paperback link. It's now live on Amazon!


Fear resides in the soul.

A welcoming widow with a twisted appetite; a war-time evil lurking behind the face of a child; a father’s love gone horribly wrong; a deadly government solution; a new job with a demonic pay scale; a woman trapped in a mysterious house with no memory of who she is or how she got there. These are a mere glimpse of the terrors that lie in wait in this collection of horror short stories, sure to grip the psyche and torment the soul.

To celebrate Friday, the 13th and Bruised Souls, the following people are participating in the blog hop. Stop by and visit them for a little creepy fun. They'll be posting either an urban legend, an old wives tale, or something scary that happened to them in real life.

Since I'm heading out to Oregon soon, here's an urban legend you may not have heard of before. In Portland, Oregon, a game called Polybius was in arcades. It was claimed that it caused psychoactive issues and was part of a secret government psychological experiment. The men in black even came into play, with people saying they saw men in black visiting the games to grab the data gathered there. It's said that it disappeared without a trace.

For a little more fun, here's a video about urban legends that are actually true.


What's your favorite urban legend or old wives tale? What's something scary that has happened to you? Do you believe any of the urban legends in the video? Have you nabbed your copy of Bruised Souls & Other Torments?