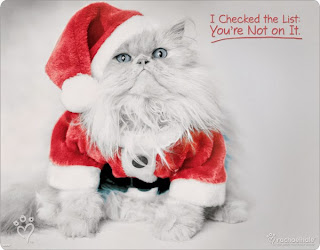 "Kringle, you owe us for last year's toy-making. What makes you think we'd do it again?"

"Come on, man, you know I'm good for it. We're talking about Christmas here!"

"Forget it. I get a check, I won't send someone up there to kick your ass. But we're out. Find someone else to slave over toys for no pay."

Kris threw down the phone, the sound of jingle bells clanging as it hit a pile of them laying beside his desk. "Shit!"

Who was he going to get to make toys this year? The elves had walked out on him three years ago. Christmas wasn't terribly profitable. Well, not if your name was Santa Claus. Or Kris Kringle. Or St. Nick. Or any one of a billion other names it seemed people had for him. He was thinking of changing his name to George Smith and retiring to Florida. The world would get over it. Besides, the greed out there was horrific. No one REALLY deserved the gifts he was leaving. His Naughty list had grown so exponentially, thanks to lack of discipline, that he now had to fudge the Nice list just to keep kids on there.

He grabbed a candy cane and jabbed it in his mouth as he thought. Peppermint always got his brain working.

"Hmmm, who can I sucker into it this year?"

No money bags meant no labor, which meant no toys. Maybe he could beg the elves. Gaffle would be the one to talk to. He'd always had the power to convince the others of anything. Then again, he'd been the one to declare they should all leave.

"All we are is slave labor. This prick doesn't care about us; he's used us for centuries. No pay, unless you count hot chocolate. No benefits (a pair of pliers does not a dentist make). I've heard there are plenty of jobs in India. Who's with me?"

Kris poured a finger of scotch, eyeballed it, poured a few more. Who was counting? Those tiny little bastards had abandoned him just like that. Not one miniature hat left behind. They'd even stolen a bunch of his tools when they'd gone.

The reindeer had moved to greener pastures. Literally. They got fed pretty well to work in America one season each year. Free food and a warm bed, year-round. Rudolph had looked sadly behind him before taking off into the air with the others. He'd been the only one to look back.

A frigid tear slid down Kris's cheek as he accidentally chomped down on the candy cane. "Bah!" He threw it across the room; it made significantly less noise than the phone had.

Then it hit him. No, not the candy cane. Penguins! Where better to outsource to than Antarctica?

This entry rings in at 500 words exactly. There's still time for you to write up your own Bad Santa story for the hop and enter at Bullish Ink.

How do you see Bad Santa? You think he's outsourcing? And do you think he has more or fewer kids on the Nice list these days?