Well, between the issues I was having with Blogger and some personal life things, I didn't end up posting the last two weeks, which I find a bit frustrating since I was back in the rhythm of posting consistently and visiting blogs. Oddly, Blogger seems to have fixed itself after I threw my hands up and ignored it for two weeks. I guess we'll see. But it's keeping me signed in again, which it wasn't doing for a while, and it appears to be keeping me signed in when I visit others. Yay? I'll celebrate when it stays consistent. ~gives Blogger the hairy eyeball~

I had some news to share during my unintentional hiatus! My mystery short story "The Class Ring" came out in the Unsettling Reads anthology Summer Bludgeon! It's a nice, thick book with stories from some awesome people, and it's mystery, so those of you who don't like horror would enjoy this one! 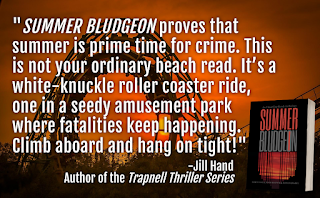 Summer Bludgeon is available from Amazon.

I was also featured on Between the Covers, a sort of talk show for authors produced by Red Penguin Books. My fellow guests were Susan Cole and Amy Bernstein, and our host was Stephanie Larkin.

I was also a showcase author at Mountain of Authors, a program put on by my local library district (Pikes Peak Library District). The keynote was Craig Johnson. He's always a great presence, very laid back, but also personable, and he tells a great story. This was the first writing event I ever intended when I decided to start really doing it, and I have a special fondness for it. It was nice to have this bit of normalcy return after being canceled for the last two years. 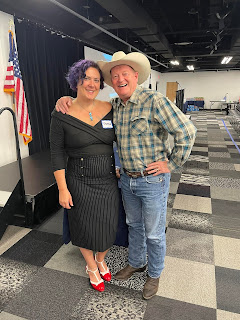 I was also supposed to be part of a group book launch for those of us who had released books during the pandemic shutdown, but...I got COVID. Ironic, eh? I made it through two big writing conferences without getting sick, even after people I hung around tested positive, but it took my son coming home at the end of the school year with it for it to spread through our house. Oddly, it was a bit of a relief to finally get something we'd been avoiding for two years. Though now I've heard that the latest versions of Omicron don't actually give you immunity when you get them, so I'm feeling pretty disgruntled about that. I'm just glad we didn't get sick until things had calmed down. We also managed to keep my daughter from getting it, though the rest of us did, which was a relief, as she's prone to pneumonia, and I was really worried about what COVID might do to her. I'm grateful we seem to have weathered it okay, though my husband has a bad, lingering cough.

Okay, media roundup time! These are some of the standouts of my media intake for the last month or so.

The Sanitorium, by Sarah Pearse 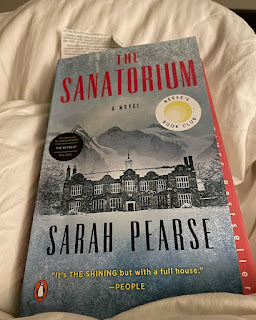 An old sanitorium has been converted into a fancy hotel, but after it opens people start disappearing, with at least one body turning up. A massive snowstorm traps the staff and a couple guests in the hotel after an avalanche takes out the road. Trapped with a killer, an inspector on a dramatic break from her job must figure out who the killer is and what they want before they kill her or someone close to her. Great sense of desolate isolation. There are many secrets slowly revealed over the course of the book. Solid suspense.

The Between, by Tananarive Due 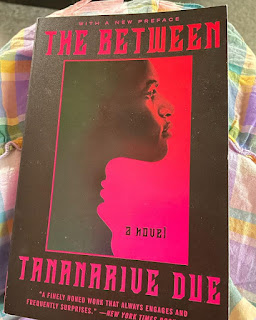 After witnessing his grandmother die then come back to life in his childhood, a man starts having weird dreams and reality seems to shift around him. As he fights for his sanity, and possibly his life, he must also deal with the man stalking his judge wife, who seems to want to destroy the entire family. Great tension that leaves you guessing whether he's crazy or if his world is really shifting the way it seems to be. I thought there were too many dream sequences (not my favorite), but it wasn't enough to deter me from reading the book and overall enjoying it.

The Man From Toronto - Netflix 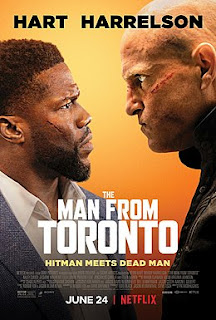 Woody Harrelson and Kevin Hart. How could it be bad? It isn't! I enjoyed this quite a bit. Kevin Hart is a man in the wrong place at the wrong time. Now the bad guys think he's the go-to guy to torture information out of suspects. But he's not the Man from Toronto, Woody Harrelson is, and Woody's now got Hart's character on his radar. It's goofy, and there's a hysterical scene that I can't describe because I feel I'd give something away, but it's definitely worth a viewing when you need a laugh. 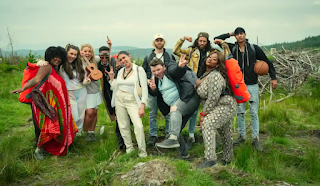 Okay, so it's "reality" television, but there's something satisfying about seeing some of the most entitled, bratty, twenty-somethings have to learn how to do things for themselves. There's one who seems beyond help, but the others appear to be trying. Good for mind numbing entertainment. These kids have been voluntold by their parents to go to a rugged camp with outhouses and tents. So far, they've had to find their food, dress a deer, learn to cut down trees, etc. 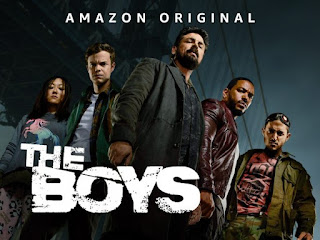 The new season is running on Amazon. I've been looking forward to Jensen Ackles (Supernatural) joining the show, but it's been an odd introduction to him, so far. The boys are back together, but there's strife between them, and trust is hard to come by. They think they've found the ultimate weapon against their apparently unbeatable enemy, but the joke's on them. Plenty of intrigue and tension. There are always tons of things that go wrong, no matter how well they try to plan for it. And the surprises keep coming. It's dark and gritty, but they make sure you can figure out from the first episode of each season if it's the type of show for you or not.

What have you been watching? Any good books read lately? How are you doing on your reading goals for the year?

Congrats on getting your story published. Glad your family and you recovered from COVID.

I've been watching Stranger Things and just finished the last series of Grace and Frankie. They had a great ending to the series that was really satisfying.

I don't think I realized this was the last season! I haven't finished it yet, but I'm glad to hear it's a satisfying ending.

Hi Shannon - oh I'm so pleased you all came through the dreaded covid, and kept your daughter clear. It sounds as though you've been busy - I love that image of you with Craig ...

I'm afraid I'm into tennis season and more sport - takes the tv aspect away - but I saw most brilliantly creative crafted film called 'Flee' - my latest blog post ... suggested by our Film Society ...

I have to get reading a lot more ... but lots of other things happening. Take care and all the best to you and the family - cheers Hilary

I definitely need to be reading more, too, but I fit what I can in right now and tell myself I'll have more time to read later. We all know how that goes!

I'm glad you and your family got over that nasty covid okay.

Right now I've been watching season four of Stranger Things and find it really good overall, just a little too disturbing in some scenes; I've been watching the campy '60s Batman TV series on Tubi (free streaming)! lol While not my favourite version of Batman, I grew up watching the reruns and that's how I was introduced to the Dark Knight Detective, so I watch them for nostalgic reasons.

Reading? I've been reading Joe Hill's short story, "The Black Phone" that's movie adaptation just came out about a week ago. I haven't seen the movie yet but want to. I've also been reading Michael Chabon's novel, The Adventures of Cavalier and Clay. Then I have a whole list of other fiction I need to get through, or at least start, before the summer's out.

Sisters of the Quill said...

Congrats on all the publishing news, sorry re COVID. Interesting, my group blogspot with Janet Fogg, Shannon Baker, Julie Kaewert goes months without use and it doesn't freeze up.