Hi guys! Since I got behind on posting books I'd read recently, links, etc., I figured I'd do a post just for that, as well as the sign up for my book tour. I'll be releasing my holiday horror short story collection on my birthday, November 20! The first story is set on Thanksgiving, so it seems appropriate to release it the week before.

In the meantime, here's some recent media I've enjoyed! 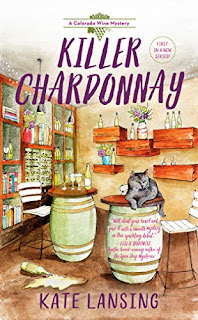 I read this for my Sisters in Crime book group. It's a cute cozy mystery about a woman who has just realized her dream by opening up a winery, only to have a murder occur in the restaurant on her very first day. A little light romance, interesting suspects, a troubled brother, some wine details, and plenty of intrigue. Also, Kate Lansing is adorable.

Bird by Bird, by Anne Lamott 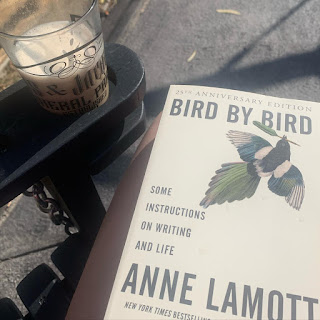 I've been reading one or two chapters of a craft book each required writing day, and finally finished this one. It comes highly recommended for a reason. Deeply honest (sometimes to a questionable extent that made me wonder if I liked the author as a person), down-to-earth, and inspirational. I imagine her classes are effective. She discusses all things writing: the ups and downs that make up the roller coaster, the fears (some even realized), the criticisms, and the realities of publication. It's told in a relatable way, as if one's reading a really long personal essay. 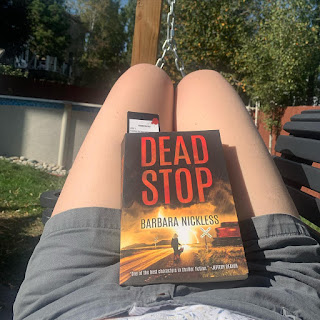 Barb's third book is next on my book group's list, but I'd only read the first one, so I decided to read them in order. Of course, then I read them in the wrong order, because after this one I read number 4 instead of number 3. Sigh.

Anyway, Sydney Parnell is a train cop. A war veteran, she and her military-trained K9, Clyde, deal with the ghosts of their past while wandering the train yards at night. Only, bad things happen at the train yards sometimes. In this particular book, Sydney responds to a call from one of her engineers. He's hit a woman, who was standing on the tracks. But when she investigates, it's discovered the woman didn't commit suicide--she was bound with wire and left to die.

In the meantime, her boyfriend is investigating a brutal family slaying. A father and son have been found dead in their home. The father, a veteran, is suspected of murder suicide, possibly PTSD, but the wife and little girl are missing. What could he possibly have done with them?

Gone to Darkness, by Barbara Nickless 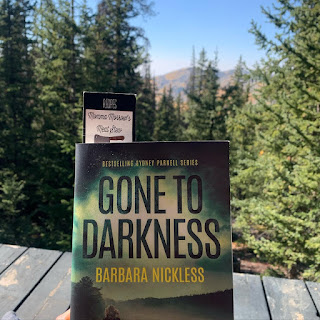 As mentioned above, I messed up. Pretty sure this is book 4, not 3. (Picture taken from the front porch of my new cabin!!)

A man is found in a freezer train car. Clothed in a woman's dress, his body scarred with fresh writing, he was only found because a strange woman signaled to the train as it went by. But where's the woman? Why is Noah in a dress? Who tortured him to excessive levels before killing him? And who's next?

Sydney has a lot to prove in this one, and she aims to do it. But while she's stalking a killer, somebody's stalking her.

Just as with her preceding books, Barb brings it with this one. She'll break your heart after she makes it stutter.

Smitten with Ravioli, by Ellen Jacobson 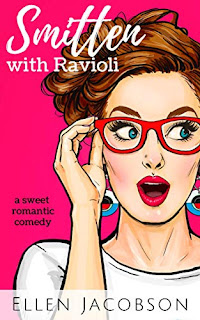 A cute romance with travel abroad, this one features a disgraced graduate student who flees to Italy to escape a bad relationship and a scholarly humiliation. The last thing she wants is a romance. But we all know romance finds us on its own timeline. The problem is, Ginny's been lying since she met him, thinking it was a one-time run-in, so when it turns out they're stuck together in this little town, she has to dig deeper or come clean. 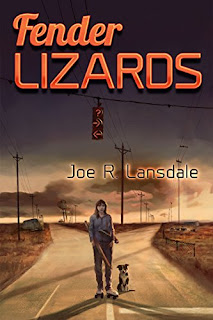 Dot, a roller-skating waitress who lives in a trailer park in small-town Texas, finds herself involved with a roller derby. Her boss at the Dairy Bob offers to back it, and she ropes in her sister and fellow waitresses, with her mysterious uncle, who appeared out of nowhere years after her father disappeared on a cigarette run. The heroine in this has a lot of heart and a philosophical mind. She's honest and no-nonsense. Between taking care of her sister's abusive boyfriend (husband? I don't remember for sure), a new love interest, and life in general, Dot does the best she can to maneuver through her day to day and survive.

I *think* that catches me up with the books I've read since my last time posting them. The last two were e-book.

There's no way I'm going to remember everything I've watched movie/TV-wise, but I know I binge watched the show Pen15 after a friend recommended it. 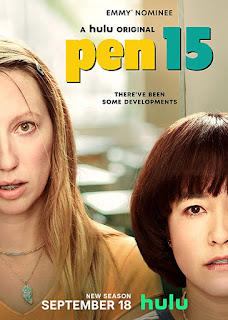 This one's hard to explain, but I really enjoyed it. The two main actresses are adults, but they're playing middle school versions of themselves. The rest of the actors in the show are legitimately kids. It's hilarious at times, rough at other times, and frighteningly accurate to middle school girl behavior. I can't say I've done everything they do in the show, but it still felt accurate (and horrifying). There were times when they made things so uncomfortable I had to cover my eyes and squirm in my seat. Blatantly honest.

It's the story of two friends battling their way through the middle school halls and grown up family problems. One of them earns the name Ugliest Girl in School at the very beginning. The other one tries to pretend she can't hear her parents fighting all the time. First dates, first thongs, so many firsts. 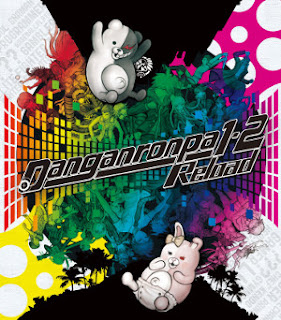 This is pretty much my daughter's favorite thing ever right now. It's a game series that Cinnamon Toast Ken does walkthroughs of on YouTube. One version was also put into a movie form. I'm not going to pretend to understand it. It reminds me of the Japanese horror film Battle Royale. Each game finds a new class entering the Academy. They don't remember who they were before, and that evil little bear in the image above (Monokuma) tells them they have to kill each other to get out. Each time someone dies, a trial is held. The other characters must find out who killed that character. If they guess right, the killer gets punished (horribly, but creatively.) If they guess wrong, they'll all be punished. Ultimately, the survivors must find their way out. 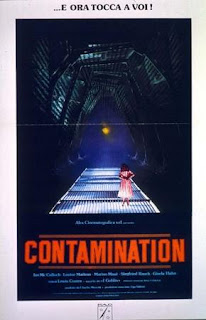 I watched the Joe Bob Briggs Last Drive-in version of this 1980 film. It's a blatant 80s ripoff of Alien, complete with aliens and exploding chests. A piece of the trivia was that there were multiple languages being spoken by the various actors, and it was ultimately dubbed in English. Pretty goofy and about to leave Shudder. I probably wouldn't watch it again. 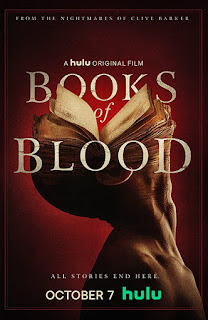 I'm actually currently reading the Books of Blood, all three volumes, and I only recognized one of the stories in this. Not sure if that means I haven't gotten to the others or they changed them. Not terrible, not great. The first story is the best. The second one is the most memorable. I've already forgotten what the third one was. 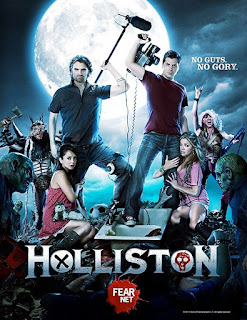 This one's available on Shudder. It has the feel of a sitcom, but with cheesy horror goodness thrown in. Two men live and work together at a TV station making low budget commercials. Their real dream is to be horror film makers. They also host a TV show where they show old horror films. One's girlfriend is an artist, a cutesy girl who creates bizarre and freaky art. The other's ex shows up, and she's a doctor or a nurse (I don't remember since it's not actually a big part of the storyline.) There's an imaginary friend who shows up to give bad advice, who also happens to wear fishnets and leather. Dee Snyder plays their boss and a guy in a cover band. Obviously low budget, but lots of fun. There have been several great horror icons doing cameos, including Kane Hodder, Tony Todd, and Danielle Harris. Seth Green plays a goofy special effects guy with multiple personalities. 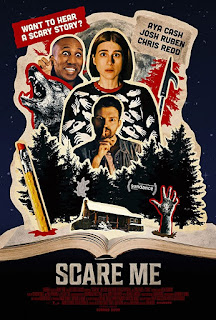 This is an entertaining indie horror flick on Shudder. Two authors stowaway at cabins in the woods and decide to scare each other with stories. The stories within the story are fun. One of them is a published and known author, the other a newbie. In the end you'll have to ask yourself if the author who won really won at all.

Haunts and Hellions. Gothic romance anthology from horroraddicts.com. This one's coming up fast, but they're great to work with, so it's worth a try. 2000-5000 words. Pays $10. Deadline October 31.

Slashertorte is an anthology of cake horror. Up to 2000 words. Pays $.01/word. Deadline November 1.

Finally, if you'd like to sign up to help launch my holiday horror tales, you can click this LINK or fill out the form below. THANK YOU!

Read any of these books or watched any of the shows? Have you heard of Danganronpa or played the game? Any of these links of interest? What have you been reading? Found any good new (or old) shows? Any media you'd recommend?