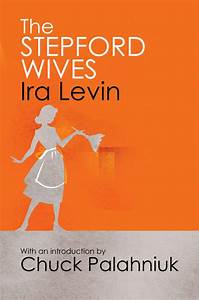 This is one that we all probably know the story of, whether we've read it, watched one of the movie versions, or none of the above. I'm surprised it took me this long to finally read it. It should be noted that, like Bubba Ho-Tep, I believe this is a novella, not a novel.

Stepford Wives is a clever and frightening bit of satire. Like The Handmaid's Tale, I'm sure it's more horrifying for female readers than male, because it gets to the root of gender imbalance and how tenuous our current hold on things really is. How easy it would be to lose it all and become powerless again, controlled by the men in our lives. (If you'd like a good horror film that shows a bit of when this happened in real life in Iran, watch Under the Shadow on Netflix. Though there's a paranormal element, the real horror is the female main character having to adapt to living in a completely different world where she's become a second class citizen and can't even flee her home without a head covering on without being chided and threatened for it. It's chilling.)

The premise is technically absurd, but that's part of the satire. And Levin makes it convincing. He never goes into the nitty gritty details of how any of it's being done, but he doesn't need to.

I expected the main character's husband to already be a sexist jerk at the beginning, but the thing is, he supports Joanna in her feminism, in her drive to fight the good fight. He supports the fact that she isn't a perfect homemaker, and that her photography career is worthwhile. And that's what makes it so hard to understand when the signs start pointing to him wanting a perfect Stepford-style wife, who does nothing but please her husband, clean the house, cook, and take care of the children. I actually found his turning to the dark side far harder to stomach than the concept of perfect wife-bots, but that's probably because the dread of having one's husband turn on them despite a seemingly good marriage plants seeds of doubt. It hurts to read, really. Just like The Handmaid's Tale.

This is a fairly light read, quick, witty, simple. But there's so much buried beneath the surface. Definitely a worthwhile read, even if you feel you already know the story.