Setting up a Book Signing Table

I've only participated in two signings as an author now, so I'm by no means an expert. However, I wanted to throw out a few suggestions for folks getting ready to do a book signing, based on what I've learned in participating, volunteering with setup, attending large signings, and visiting other friends doing single author signings.

Both of my signings have been at large events, with multiple authors participating, so there's a difference between this type and a single author signing. Your table setup will be similar between the two, though.

You want your table to bring people over to speak with you. It should be highly visible and make people want to wander over and see what's going on. There are a few things you can do that will draw the eye without being tacky.

It's a good idea to invest in book stands. Instead of having your books prone on the surface of the table, have some of them sitting up in a book stand or at least stand them against the prone books. You want them visible. There are many types, from the most basic to big ones that are more racks than stands. 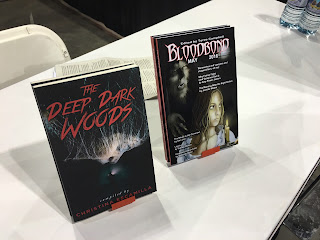 It's a good idea to have a banner or blown up image of your book cover. If a banner, you should be able to tape it into the front of the table. If a blown up image, it's a good idea to have an easel to put it on. If you're signing at a bookstore, they may be providing the signage. This is something you'll want to inquire about when you arrange the signing. It's probably wise to keep your own signage in the car just in case something goes wrong.

If you are one author among many, either because you co-wrote a book or wrote a shorter piece in a collection/anthology/magazine, have a name plate. You can use cardstock or a thick paper and fold it in half with your name printed on either side. Or you can have something professionally made. People want to know who they're talking to. I found it caused confusion when I didn't have a nameplate at Denver Comic Con. Since I'd previously been provided one at Pikes Peak Writers Conference, I'd made the mistake of assuming this would be a regular thing.

I didn't do this, but I'd recommend having your own tablecloth, at least if it's a solo signing. Really, it would work at a larger signing, too. It looks nicer that way, and it can be eye catching to have that splash of color. Try to make it appropriate to the type of book you're selling. This is another item I'd say may be provided for you, but keep a spare with your signing items in the trunk of your car, just in case.

It's always a good idea to have swag to hand out. This way, people who aren't buying your book may look it up later, or look up other books you've written. Of course, you want swag for those buying, too. People like free things. And if those free things happen to encourage someone to buy your books, woo-hoo!

A big item is bookmarks. Have bookmarks with your name, web page, and current book cover (or a couple of your covers) on it. If you have a series, indicate this and possibly have the other covers on there, with the most recent being dominant. Hand these out to people who stop to chat, and include one with each book you sign. Some people sign their bookmarks. I'm not sure that matters, but it's up to you. An alternative or addition to this might be to do this postcard sized instead of bookmark, but people are more likely to use a bookmark.

Business cards. You should always have business cards with your name, web page, and any other information you want to give out. This should have your book cover on it. If you're selling a book that's not just yours (an anthology or magazine), you might just want cards that are themed to your writing, but don't have the book cover on it. Up to you. Give these cards out with the bookmarks or instead of them. If you make a professional connection at your signing, you need to have a card to give to them. I recommend against putting a phone number on them. You can write it on if you want someone to have it, but do you really want to hand your phone number out to a bunch of strangers?

Pens are another possibility. I met someone who has personalized pens with their name and website on them. They give them out to each person who buys a book or chats with them. I also read about someone who makes a point of signing with that pen, then handing it to them with the book. People use pens! And they're likely to walk away with one, anyway, so why not have it branded?

Dress nicely, or however appropriate to the event. I wore business casual at the writer's conference book signing, but went casual for Comic Con, which felt more appropriate to me. Unless you're dressing up in costume, make sure your appearance is pleasant and, it should go without saying, clean. Do your hair, wear some makeup (ladies), don't have dirty ragged nails. 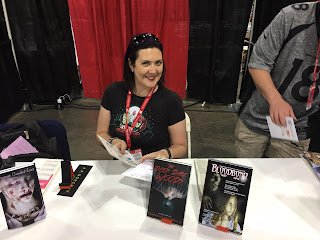 Stand up! I stood through one signing, sat through the other. I engaged more people by standing up. Make eye contact. Start conversations. Say hi to people. Don't be an obnoxious salesperson, but do interact with people. 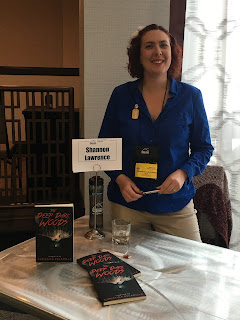 I've seen recommendations for and against this, so you'll want to consider whether it works for you or not, but having candy or a baked good at the table with you can draw people over to talk to you. Plus, people like sweet stuff. This is something you need to confirm is okay with the venue you're signing at, so you don't disrespect them by violating their rules.

If you have a newsletter, have a sign up sheet on the table. Let people know they can sign up for your newsletter, and tell them how it will benefit them. Do they get a free short story when they sign up? Will they hear about releases sooner? Are there discounts?

If you have other publications you are not selling at the event, you'll want to let people know about them. You can do this by including them on swag you're giving out, brochures/flyers, or a sign that has information on where to find them. I did a simple print-up with the covers of the books I was not selling (the ones that were e-book only), and a link for where to find out how to buy them (my blog). I wanted it to be easy to remember since I only had the one sign, but if I'd had more prep time, I would have printed up more to hand out or put it in postcard format to hand to people. 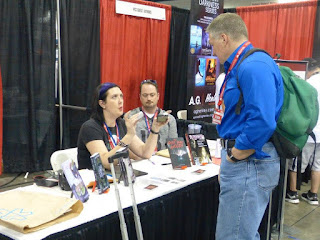 I've seen all kinds of eye-catching items at book signings, including feathered pens, photos, themed candy, cakes, skeletons, stuffed toys, dolls, figures, toys, etc. Make it your own. Make it something that will start conversations and draw the eye. Be interesting. Your purpose is to get people over to look at your books and, hopefully, buy them.

What do you recommend having (or not having) at a signing table? What have you learned from book signings you've participated in? What is one of the coolest things you've seen at an author's signing table? Any other suggestions?

*My thanks out to Michelle Baker and Patrick Hester who took the photos in this post.